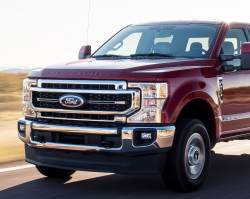 Ford thinks there's a good chance windshields can pop off the latest F-Series trucks during a crash because they weren't properly bonded to the structure. And while no injuries have been reported yet, the automaker says this greatly increases the chances of something bad happening during a collision. Yep, that checks out. Owners should be on the lookout for recall notices during the first week of April.